I really, really dislike being almost bullied into having a smear test every time I come anywhere near an NHS health professional.

For a start, I find everything to do with sexual health sexist and unequal: only today, when I filled the form to register with my new GP, there was a section entitled “If You’re Female” containing all sorts of personal questions I might not necessarily want a receptionist to see, like

All this stuff is (or should be) confidential medical information which should remain between me and the doctor or nurse, not on a form that could be lying on the reception desk for hours. Funnily enough, the form contained no “If You’re Male” section asking questions such as

Have you ever experienced erectile dysfunction?
Have you ever had trouble urinating due to prostate problems?
When was the last time you examined your testicles?
Etc, etc.

Not long after I registered with the surgery at my old address – a surgery I avoided as much as possible after my first visit, due to the incredibly dopey middle-aged Indian reception staff who’d routinely ask me to spell my (very normal) surname five times in a row and would still get it wrong, not to mention the verbally abusive doctor because I dared to go to a private specialist! – the nurse suddenly asked me (I was there for a totally unrelated matter) “When was your last smear test?”

Now, I’d never been registered with a GP before and didn’t even know these things were supposed to happen on a regular basis. So I said “Er… never…” “Why not?” she replied in a tone that implied she couldn’t believe anyone could be so stupid. I said “I dunno” since no one had ever mentioned smear tests to me before. “Well, you need to have one” she said firmly. I didn’t like the sound of that and said I’d think about it. Cue much eye-rolling, but at least I managed to escape without having to make an appointment.

I then looked up the whole sorry business on the internet, and concluded that I really wasn’t at high risk of contracting cervical cancer (thanks to the kind of almost monastic lifestyle no twenty-first century UK resident ought to be getting away with ) and might as well subject myself to monthly lung cancer or liver cirrhosis screening, for all the good it would do me.

For the next few years I was regularly bombarded with letters from the surgery offering me smear test after smear test. I ignored them all even though they became increasingly frantic and hysterical, until I finally received the Holy Grail: an opt-out form where I agreed to remove myself from the screening programme and promise not to go crying to them if I ever got cancer, sign here.

Free at last! Well, only until I moved and had to register with another surgery. I have the preliminary appointment with the nurse on Thursday and am mentally psyching myself up for another battle of wills. 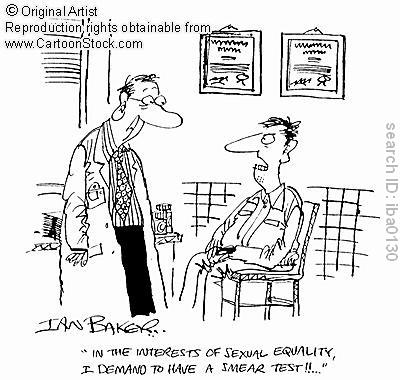 I realise this may sound like cutting off your nose to spite your face (“it won’t hurt you to have it done”, etc) but I have one remark to make and one question to ask.

Remark: These tests are not very reliable. I read that one test in ten has to be retaken as the results were inconclusive or (much worse) a false positive. One in ten! Thanks but no thanks, I’d rather take my chances.

Question: Since cervical cancer is caused by the HPV virus and said virus is spread by sexual contact, why are all those programmes aimed only at women? Why should I, who have only ever had one sexual partner, go through this unpleasant experience every three years (every five years from the age of fifty) for the rest of my life, when it would be so much easier to test my boyfriend so we know once and for all whether or not he’s carrying the little buggers? Why is the newly-invented HPV vaccine being thrown at all teenage girls, even the ones who aren’t sexually active “just in case”, whereas boys are totally forgotten even though they’ll certainly be doing their bit to spread the virus too!

I don’t know the answer to this but I suspect it is “Because there’s no test or vaccine aimed at men”. Well why not? Aren’t they concerned too? Just because they don’t have a cervix doesn’t mean they should get away with passing on nasties willy-nilly. Imagine not testing the women in families with a history of haemophilia because they don’t personally suffer from it… Unthinkable, isn’t it?

Update: the nurse at my new surgery totally took no for an answer! I was stunned!