First of all, I am amused at the picture: it just so happens that the boy in the purple tie (which tells us he’s in the ‘gifted and talented’ stream) is black, whereas the other two (average and thicko streams) are white. I don’t believe for one second that this state of affairs was engineered by the Guardian photographer for subliminal propaganda reasons. Nope, I don’t. Nuh-huh.

Second, can I take this opportunity to point out how much I HATE the American-invented label giftedandtalented.

“But Murphy says that without setting, the school wouldn’t have survived. He says that he has heard of other schools using different colour uniforms to mark different “houses”

Duh, everyone has! It’s a well-known fact that Gryffindors wear red, Slytherins…

“Courtney cites famous research conducted by American teacher Jane Elliott in the 60s, in which blue-eyed children did better and began bullying brown-eyed children after being told that they were superior.”

What’s that got to do with streaming in schools? I didn’t realise having blue eyes depended on academic results. Just how stupid are these people? As for the bullying issue, maybe that’s why children in different streams are kept separate from each other, genius.

Anyway, ‘scientists’ in the Sixties and Seventies breastfed chimpanzees and believed introducing children to sex was pedagogic. Who gives a shit about their experiments.

I personally have no problem with streaming in schools (even though this particular example  sounds a bit more extreme than most); quite frankly I would have loved to have experienced it. It doesn’t exist in France (it’s elitist! It’s against equality! Horror of horrors!) so for my entire school career I had every single lesson with my whole class (on average 30 people).

But what’s more important here? Politics and ideologies or allowing pupils to reach their full potential? Do I really want to know the answer? Hmmm.

And then I read the first sentence of the first comment, and now I want to kill.

“Nice to see apartheid is alive and well in the UK education system.”

Nice to see Guardian readers are easily as stupid and blinkered as the Daily Mail readers they despise so much.

And since I’m on a (maki) roll, here’s another Guardian article for your enjoyment: 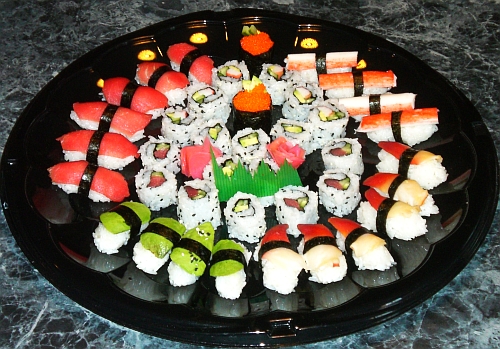 That’s right, I managed to find something to rant about in a article on sushi. You’ll see.

You might have noticed that China is quite trendy at the moment. Everyone is talking about it, inspired by it and going there on holiday. Well, not so long ago, it was Japan that was the red-hot destination and source of all things cultural, from manga to food. Hence the unstoppable rise of sushi. But poor old Japan has since suffered a few setbacks and been replaced in the hearts of the western world by its ancient enemy. That must have hurt.

It cannot be a coincidence that the remake of The Karate Kid is now set in China, with the kid in question learning kung fu from Mr Han. Mr Miyagi and his boring old karate are so 20 years ago…

We still love sushi of course but it seems to have become acceptable to sneer at all things Japanese, in the Guardian at least:

“Japanese sushi restaurants are sexist to an extent that would appal most westerners.”

Actually, most of us already know that Japan is, generally speaking, an extremely patriarchal society. Don’t go all bandwagon-jumping feminist on us now.

“The traditional ones discourage single women from dining in them altogether.”

Oops, too late. Anyway, single Japanese women are discouraged from getting too independent in all sorts of ways. I think sushi restaurants are the least of their worries. Things are slowly changing however.

“And an idiotic belief persists that women have warmer hands than men and thus might somehow the spoil fish by handling it.”

The Japanese do have many weird beliefs but then so do we. Isn’t the word “idiotic” a bit strong and, let’s say the word, judgmental for the Guardian? Huh?

“But so much [sushi-eating] etiquette, as with codes of wine drinking and matching, is based on an inferiority complex and designed to exclude. It’s best skimmed, selected from and mostly discarded.”

“So began the infamous annihilation of this fish [tuna] and the shameful reluctance of the Japanese to stem its destruction.”

Yup, because we in the West don’t overfish at all, ever. I suggest you have a word with Hugh Fearnley-Whittingstall. He writes for the Guardian too, you know.

One thought on “Islands in the stream, that is what we are…”