Here is the indeniable proof that all that guff about black Hermione in Harry Potter and the Cursed Child was in fact a large quantity of agenda-driven bullshit.

So, for the second year in a row, the best actress they could find just happens to be black (and her daughter must therefore be black as well). Meanwhile, the best actors for all the other parts just happen to be white – again. Do the production people actually take us for complete idiots?

I do wish Rowling had been honest about her intentions. If she had just said: “Look, I didn’t think about it at the time but I actually regret the lack of diversity in the Trio; it makes more sense to me that at least one of them isn’t white and Hermione is the perfect candidate. It brings balance to the story and quite frankly, anything that can empower black girls is a good thing”, I’m pretty sure the vast majority of fans would have accepted this and understood her reasoning. Instead she lied through her teeth because she couldn’t bring herself to own her decision.

I have a feeling this is the main reason for the backlash, not racism as she was so keen to proclaim; people know when they’re having the wool pulled over their eyes. Rowling was far, far too defensive about it even to fans who only wanted to calmly explain how they felt (see the tweet above). Her complete refusal to admit that this huge change after all these years (and all these films) suddenly turned everything upside-down and greatly affected how fans related to the character was incredibly off-putting.

I’m sure the official narrative for casting another black actress is “continuity”. Hahaha. Maybe Rachel Dolezal should have played Hermione in the films!

That weird bust of Cristiano Ronaldo 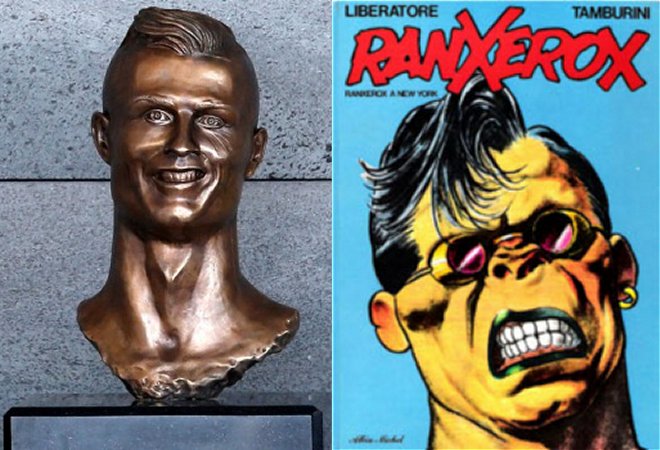 I personally thought the woman was a maid or an au pair, not even a nanny (I expect nannies to behave more professionally). Apparently this makes me a horrible racist, even though her skin colour had nothing to do with it.

So, to those who assumed that Kim was the nanny, it’s worth thinking about what kind of woman you might have expected Kelly to be married to.

Quite frankly, I did not think about that for one single solitary second. He could be married to Cthulhu for all I care.

Did people assume that the Asian woman in his home was the nanny because she seems to behave in a subservient way? She seems scared, flustered, her posture is low to the ground and she doesn’t make eye contact or speak.

Well, her body language is extremely strange for a wife. Why make such a production of taking the children out of the room, skidding sideways through the door in a state of total panic like a cartoon character, and looking for all the world as if she was about to lose her job and be given a hundred lashes? Why crawl on the floor like some deranged Uriah Heep, even if she was worried about being seen on camera? She would have been twice as quick and much less of a disturbance had she just walked normally into the room, picked up the girl, pushed the baby out and closed the door after her. Instead we got an undignified, attention-grabbing display.

She was also surprisingly and unnecessarily rough with the children, as if she was dragging them out of the way of a speeding train. Look at her pull the little girl by the arm, making her fall over! The whole thing looked ridiculous and out of proportion with the gravity of the incident.

The interesting thing is, more people might have assumed she was the wife had she been white, but then the obligatory online debate would have been “Is she a victim of domestic abuse?” Because what kind of wife is that scared of disturbing her husband? Yes, he was being interviewed on live television but shit happens when you work from home and have small children. It was his own fault for not locking his study door anyway.

Or is it that she can’t possibly be the heroine because Asian women are routinely depicted as secondary figures in the media, if they are visible at all.

Heroine? What is this, a comic? She was not even supposed to be in the room at all!

This article is trying so hard to make people feel bad for having normal human thoughts, it is rather pathetic. Let’s consider the source, shall we?

From the author’s profile page:

Vera Chok is an actor, writer and performance-maker. She investigates sex , shame, race and connection

Ah. We are dealing with a professional.

“Sex, shame, race and connection”. Let me guess… what she does is find – or create – connections between sex, race and shame. It’s so easy when you know how; these people all function in the same way. This is how their thought process goes:

*watches video*
“hahaha that poor nanny”
“wait, why did I think she was the nanny and not the wife?”
“eek! it’s because of her skin colour, isn’t it”
“what is wrong with me? I know I’m not a racist”
“oh dear, I’m mortified… I can’t believe I just fell right into a trap I spend my life trying to avoid”
“well look at that, plenty of other people thought the non-white woman was a nanny as well, and I bet they didn’t even stop to wonder why”
“this obviously means they’re unconsciously racist”
“I have to enlighten them, it will make me feel better about myself into the bargain”

Cue patronising lecture festooned with interesting assumptions about how complete strangers perceive race and why they are wrong.

Regarding her point about the representation of Asian women in fiction, I do remember seeing Asian women – in This Life and Torchwood in particular – who were just part of the gang and did not have any special Asian superpowers or weaknesses. I have only seen one of the shows she refers to – Elementary – but she is so dreadfully wrong about Lucy Liu’s character that I cannot trust anything else she says.

3) Asian woman facilitates hero’s mission by being good at maths, science or computers (episode one of Black Mirror; Lucy Liu in Elementary);

Complete rubbish. Joan Watson (played by Lucy Liu) is not “good at maths, science or computers”. She is a former surgeon, which makes her very knowledgeable about medicine, pathology and anatomy. This often comes in handy in her job as a detective – if anything, she facilitates her own mission. When she or Sherlock need help with science or IT stuff, they turn to one of their expert acquaintances.

Also, Liu is not some second banana who gets wheeled out when the script calls for a bit of skirt, she’s the co-star. Watson started out as Sherlock’s assistant but was soon promoted to equal partner. Sherlock actually makes this point on a regular basis to anyone who questions her presence.

Vera Chok seriously distorts the facts to fit her own narrative here. And to think she goes on about unconscious bias!

Also ask yourself what goes through your mind when you see an interracial couple on the street. Do you wonder about their lives together in a way you wouldn’t question a couple of the same skin colour?

Someone is seriously projecting. Does she picture them naked in bed too? Is she 12?

On screen, which interracial couplings are you more likely to see and therefore think of as normal (white man with sexy black/Latino/Asian woman), and what disturbs you (black/Asian man with white woman)?

1. She is telling people what to think!

2. Actually, black man with white woman is the most common interracial pairing, on screen and in real life. Why does she think it’s less normal than any of the others?

3. As for what is ‘normal’ and what is ‘disturbing’, I’m afraid she’s projecting again. Hasn’t it occurred to her that not all her readers are white with white partners, and are therefore unlikely to be disturbed by their own situation – or that of their friends? What makes her think she’s the font of all race knowledge?

4. I am also offended that the white woman is not described as sexy, just like the others! This is discrimination!

Anyway, speaking of projecting… at least Boulet, the author of the French cartoon below, realised his mistake before he started haranguing the ‘racist white old biddies who probably vote for Marine Le Pen’. 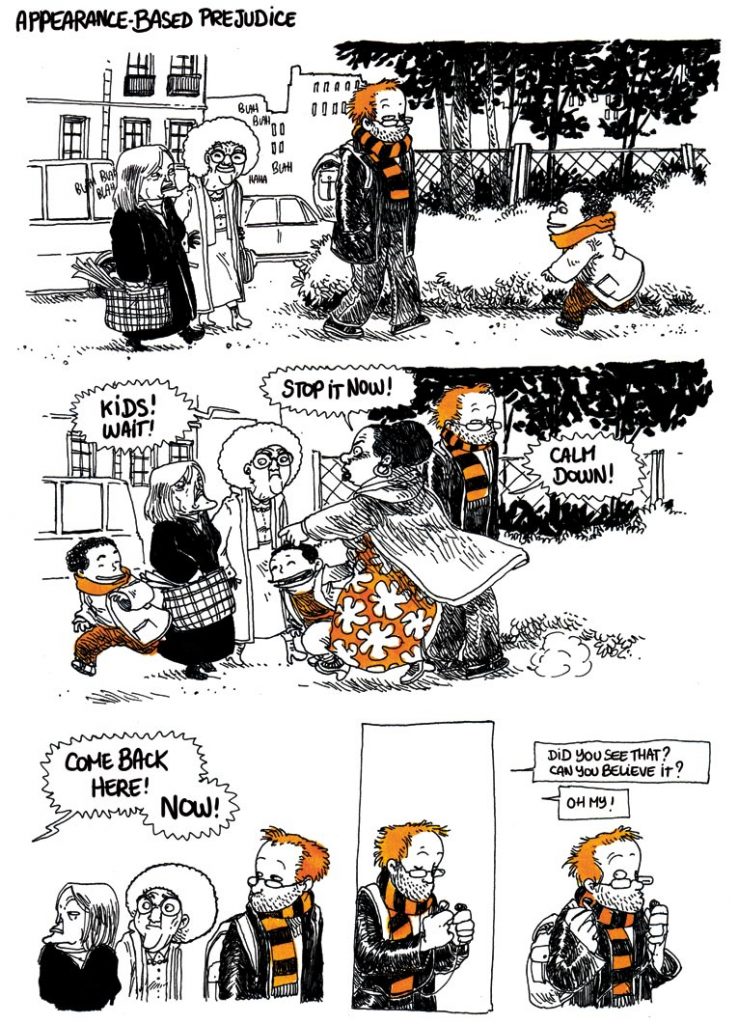 And look at that! The family have now become celebrities, are giving interviews and will hold a press conference!