Fair warning: this interview of Eddie Izzard in the Guardian is prompting in me some thoughts which will definitely be considered transphobic by modern society. Of course, it doesn’t take much these days.

So, Eddie now identifies as a woman but still wants to be in ‘boy mode’ when he feels like it, including playing male characters in films. 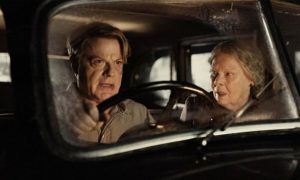 It’s a bit convenient, considering that’s not exactly how it works for us ‘cis’ people – no way would Eddie Redmayne be cast as a trans woman in The Danish Girl if it was being made today, let alone get an Oscar nomination for it!

But, at the end of the day, whatever. Not my circus, not my monkeys.

What is more annnoying is this bit:

Would she like boobs? “Yeah! I’ve had boob envy since my teens. Just when teenage girls of my age were going ‘I want boobs’, I was thinking yeah me too. But I couldn’t say it. They talk about penis envy, and I believe some women suffer penis envy. I cannot for the life of me get my head around this. But yes, I’ve always had breasts envy.”

So you had breast envy, did you? Did you have period envy, too ? You can’t get one without the other, after all. How about constant objectification and sexualisation by society envy? Or being put down and belittled by men when you’re cleverer than them envy? Or unwanted pregnancy and abortion envy? Or street harassment and sexual assault envy? Or being murdered for daring to walk down the street envy?

Did any of these things which are also part and parcel of the female condition ever cross your mind as a teenager, or even later? Of course not, it’s so much more fun to pick and choose the best bits without having to put up with the more unpleasant aspects. A Barbie girl in a Barbie world, basically.

Now, I am sure coming out and living as a trans woman cannot be a bed of roses, but the hostility you can experience is totally different from what biological women have to put with from childhood.

Izzard shows me how people used to laugh in her face. She moves her face forward so she is virtually headbutting the screen. “People would stand this close, and say: ‘What the fuck is that? What the fuck is that?’ They turn you into an it.” Did it scare her? “No, it infuriated me. I want to fight everyone that says things like that.”

The above would obviously never happen to someone who was born a woman. This is an expression of fear and incomprehension: “You’re a bloke! You should look and act like a bloke! What’s wrong with you?”

Whereas women traditionally get :”You’re a second class citizen and dont you forget it! Men get to define what you should look like, how you must act in public, how your sexuality will be expressed!” etc, etc, etc.

Having said that, transgender people often have a strange idea of what looking and acting like a woman means, which really doesn’t help matters. 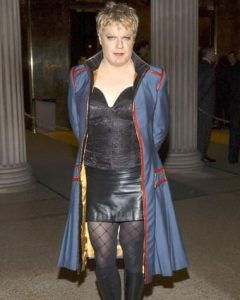 What the hell is this outfit? What woman dresses like that, unless she’s just off to work at the nearest truck stop? If trans women genuinely are a woman in a man’s body as we keep being told, why do they get femininity so wrong?

I’m not even going to mention Grayson Perry and his ‘female alter ego’ Claire. 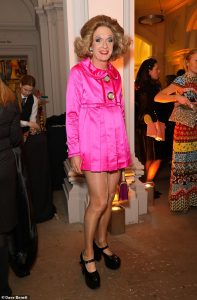 Going back to Eddie:

“People don’t expect a trans woman to be able to run 130 marathons for charity and it changes their sense of what a trans woman is. I can see in their eyes they go: well, fair play.”

Now this here is what we in the profession call “shoehorning”. Dear Eddie, people do not expect anyone to run 130 marathons for charity. Anyone. Let alone a celebrity. That’s all there is to it.

Also, you ran those marathons looking like a man so people saw a man. It’s still impressive. 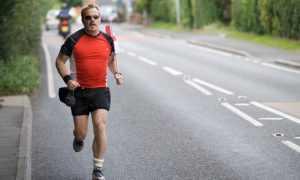 So, this was going so well and then…

“I’d like to get to the place where we don’t have to have this fight because I’m trying to deal with rightwing fascists and what they say.”

Oh dear. Rightwing fascists, no less. And you want to be taken seriously as a would-be Labour politician? SMH, as the cool kids say on the internets.