She’s now insulting her fans! There will be spitting next.

“While the vast majority of people responded positively to the casting decision, Rowling said: “I had a bunch of racists telling me that because Hermione ‘turned white’ – that is, lost colour from her face after a shock – that she must be a white woman, which I have a great deal of difficulty with.”

Yup, black people turn white all the time, after all. Just look at Michael Jackson.

And this is the same woman who, just the other day, was saying this:

Having decided that anyone who even questions this is a racist obviously gives her carte blanche to be rude to people:

Seriously now. If the best actor auditioning for Harry Potter had turned out to be black or Asian, would they have hired him? Would they?

Not in a million years. But hey, the sidekick is fair game.

I wonder whether she suddenly realised that pretty much everyone who matters in the HP books is white… Harry, Hermione (yes), The Weasleys, Dumbledore, McGonagall, Hagrid, Snape, the Malfoys, Mad-Eye Moody, Sirius Black, Voldemort, Wormtail, Remus Lupin, Tonks, Neville Longbottom, Luna Lovegood… even the Dursleys (but their characters wouldn’t make sense otherwise).

The non-white people only have bit parts. Funny that.

Early illustration of a scene in Philosopher’s Stone done by Rowling herself and published on her website in 2004 : 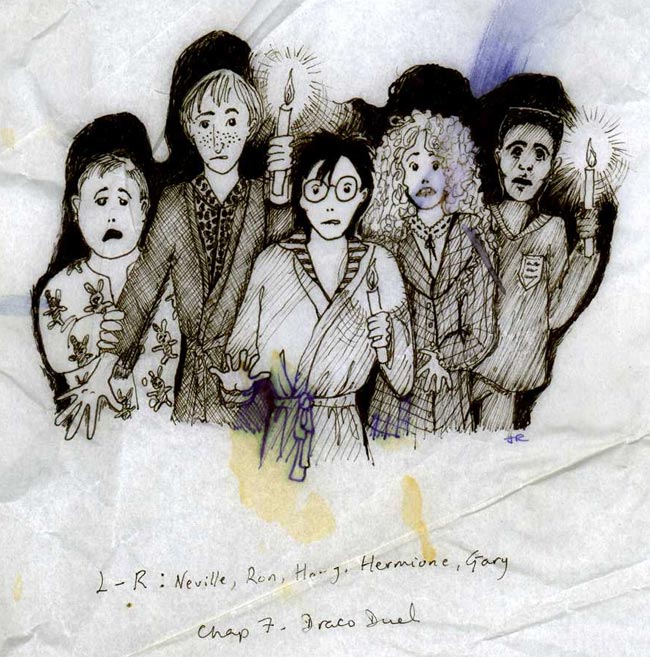 Notice how ‘Gary’ (who will become Dean Thomas) is clearly drawn as a black boy and Hermione looks perfectly Caucasian? The woman is in denial.

Ellen DeGeneres thinks it’s hilarious to publicly humiliate a woman for the sake of a cheap joke.

Titi Pierce has now been called a money-grabber by the media and half of Twitter for daring to sue everyone’s media darling. I really hate it when gay women get away with sexist behaviour that would have straight men in the doghouse faster than you can say Donald Trump.

She has received abusive phone calls and has probably changed her number by now, which can’t be cheap considering it’s her business number. Too right she’s trying to get some money out of Ellen – who has by the way not seen fit to apologise.

I really expected Ellen to have a bit more emotional intelligence, especially as she herself has been called Degenerate by countless moronic homophobes – and she’s a celebrity, not an ordinary member of the public.

So she believes it’s okay to make fun of something that is part of a person’s identity but that they did not choose to have. What could possibly go wrong with that kind of thinking, I wonder?

And boy, does it get a workout when I’m watching Have I Got News For You.

One thing that regularly happens is that one of the panel members mentions talking to a regular member of the public about the topic currently under discussion. We then invariably find out that the member of the public in question was the driver of their black cab. Because that’s the only time any of them are ever within breathing distance of the great unwashed.

This week’s episode offered two gems, both coming from a comedian called Jason Manford (I have to give his name because “the episode with the comedian” doesn’t exactly narrow it down).

First he made a joke about not knowing how to use Series Link. The rest of the panel laughed without needing any more info because in their world, everyone has Sky. As for the rest of us, that’ll teach us to be poor.

Then, later in the programme, he mentioned Wetherspoons, immediately adding: “the chain of pubs”. Because none of them has ever set foot in one, of course.

To hammer the point home, the joke was about how sad and clueless people who go to Wetherspoons are. Blimey, don’t sit on the fence, Jason, tell us how you really feel.

I haven’t felt so insulted for being an ignorant pleb since JK Rowling’s latest tweet/interview (more of that later).