Steve Allen, who is apparently some old fart of a radio DJ, recently felt the need to randomly have a go at Gordon Ramsay’s 19-year-old daughter who is currently taking part in Strictly Come Dancing.

“She’s a chubby little thing, isn’t she? Have you noticed? Probably her dad’s cooking, I should imagine.”

Now, I am reliably informed that “you used to be able to say anything to anyone” and “this is how comedy works”. Whose comedy are we talking about here? Frankie Boyle’s? Thanks but no thanks. Seriously, is there anyone out there who finds the above quip funny and/or clever? Because I for one really don’t. Every single word is designed to put her down.

So far so misogynistic, isn’t it? And then it turns out the whole thing is actually a dig at her dad, so she’s being used to make fun of someone she’s related to through not fault of her own. She’s not even a person anymore, just a tool.

This guy was trying to get a (weak) laugh out of his listeners by gratuitously insulting not only a complete stranger, but also a very soft target. That is nothing less than bullying.

Of course, Radio DJs generally are the scum of the earth anyway so we really shouldn’t be surprised. Using a young woman to have a go at her male relative seems to be a popular tactic of theirs: remember Sachsgate?

To be fair to Steve Allen, I have to hand it to him: when you’re that good-looking, you can afford to laught at others, can’t you? 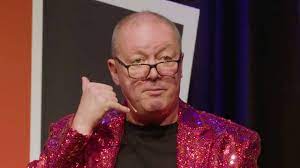