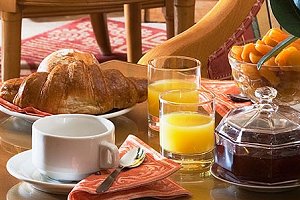 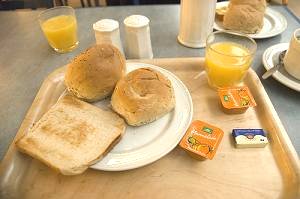 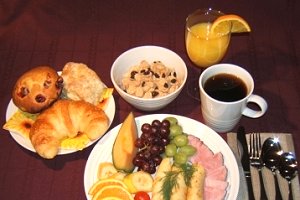 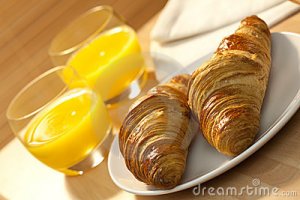 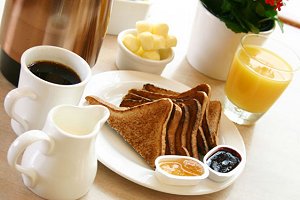 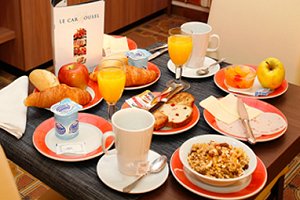 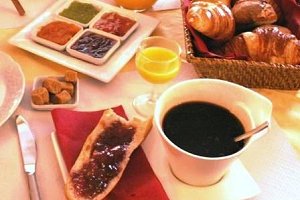 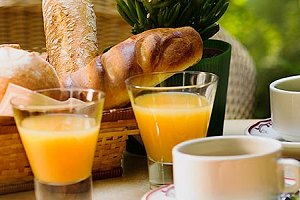 Clue: it’s cold, it’s liquid and there isn’t much of it. Anyone? Anyone? Bueller?

YES! That’s right, my problem is with the tiny, usually half-filled, mockery-of-a-refreshment glass of orange juice one always gets as part of a hotel continental breakfast. And you can’t generally ask for a refill either, unlike with tea or coffee. No provision is ever made for those of us who don’t like hot beverages but need to drink at least two decently-sized glasses of something cold in order to be able to eat.

Considering the juice is usually straight out of a cheapo carton anyway – I can tell from the slightly uriney taste – I’m not sure why they’re so miserly with it. Yes, it costs more than tea or coffee but we’re hardly talking Tropicana prices.

I can still remember those dreadful breakfasts when I was young, at guide camp or on any kind of school outing, where all I had to drink was water as the only two options were café au lait or hot chocolate. It was stomach-turning but since there was nothing else to drink I didn’t have much of a choice. Not a good way to start the day. On top of that, I had to put up with everyone staring at me as if I were an alien (not liking hot drinks makes you a pariah everywhere you go). Sigh.

So now I bring my own juice to B&Bs and have a nice swig in the room before coming down to breakfast – and the only reason I bother having breakfast is because it’s already paid for. In hotels I skip the overpriced breakfast altogether (and why is it served so early anyway? I’m on holiday, dammit! But that is another rant for another day).