“I refuse to join any club that would have me as a member.” – Groucho Marx

Anoushka Mutanda Dougherty has been offered a place at Cambridge University, but she’s mixed-race and from a state school – and only 3% of students who started at Cambridge in 2017 were black, or mixed-race with black heritage.

So? Ten seconds of Googling gets me this:

In 2011, 7.5 million people living in England and Wales (13% of the total population) were born outside the UK. Amongst the 56 million residents in England and Wales, 86% were White, 8% were Asian/Asian British and 3% were Black/African/Caribbean/Black British.

3% at Cambridge, 3% in the general population. I’m not seeing the problem here.

There’s no escaping the fact that Cambridge is a majority white and majority posh (!) institution.

Posh (!) is clearly much worse than just posh.

My mum, Anjula, is Ugandan and fled from Idi Amin’s tyrannical regime in the 1970s. The story of people like her with a mixed Indian and Ugandan background

So her mother is mixed Indian and black and her father is clearly white. This makes her only one-quarter black at best, yet she says things like “I would be one of only a handful in my year from a mixed white/Black African family” showing she only cares about her black heritage and happily ignores the Indian bit – maybe because it isn’t cool/relevant/woke enough?

The experience of minority communities has helped shape my interest in unwritten histories (you try explaining this in a UCAS statement with a limit of 4,000 characters)

I dunno, she just managed to do it in one paragraph. Also, this kind of whingeing doesnt really look very good from someone who is apparently Cambridge material.

so it stands to reason that I would focus on racial diversity in the universities I’m considering.

Because focusing on academic excellence and reputation is so white.

the fear of being pushed to behave like someone from a specific socio-economic group, just to fit in.

“I hadn’t gone back before and when I did I was at the train station [in London] and I was like, ‘Why are there so many black people here?’ I was just so used to not seeing them.”

Again, the percentage of black students at Cambridge is representative of England as a whole – London is the anomaly here. If this person lived in, say, the Cotswolds, she wouldn’t bat an eyelid when getting off the train (and might even think “How hideously white!”).

there was just one club that played R&B, and that it charged £12 entry – more than any other student venue she’d been to! Talk about having a monopoly on the market.

It is highly likely that the managers of this club are black. Why are they choosing to exploit their own people? And how is this anybody else’s fault?

“I have never, like, self-segregated but I did go to a Hip-Hop Society event and I’d just never seen so many black people in one room at one time in Cambridge! I was like, ‘Wow, this is where we all are’.”

Meanwhile, Sanjeev is at the library and Quentin is punting. How rude of them!

“I just thought the people at Cambridge wouldn’t be the people in my crowd,” he said. “I don’t want to be with so many white kids from private schools.”

And if a white student from a private school said they didn’t want to go to university with a bunch of black kids from state schools, I’m sure everyone would react very well to this announcement.

(I have to give a special mention here to my white friend who, for the first three years that we knew each other, thought that I curled my hair every morning.)

And this is supposed to be proof of what exactly? That this white friend is racist and ignorant? Countless other girls of all skin colours own a hair curler and do use it every morning, why couldn’t you be one of them? Only a frenemy would choose to take it the wrong way.

It is also perfectly normal not to be aware of what personal grooming involves for people of other ethnicities. I once had a black woman – a professional hairdresser, no less – advise me to stop dyeing my hair as it would eventually get damaged (needless to say, I have never dyed my hair in my life). Did I immediately scream racism? Answers on a postcard.

Just like Kier, who wants to study with people in his crowd, my girlfriends said they wanted to share university accommodation with students who “look like them”.

I mean, the things non-white people can get away with saying!

I asked her about the racial imbalance and the relatively high number of students from private schools… wouldn’t she want her son to be somewhere that more reflected the real world?

“That’s a good question. I mean I think I’d like him to go just wherever he’ll do really well and enjoy it but I must admit, I’m probably not choosing or thinking about where he should go from that basis,” she said. “You know, I just want him to go where he’ll get the best degree for what he wants to do.”

Oh dear, someone didn’t get the right-on memo. “The best degree for what he wants to do”? Who thinks like that?! I bet she votes Tory!

Did I decide to wear a pink fur coat that made me look like a relic of an early-2000’s 50 Cent video? Yes. Did I question this after taking my admission test with a room of prospective law students, who were all suited and booted and ready for employment in the City? Yes.

Were you determined to make the situation as awkward for yourself as possible, just to prove some sort of a point? Yes.

I took some of my concerns about racial diversity – or the lack of it – to the press officer at Cambridge University, Paul Seagrove. He said that 58 black students got places in 2017, which was higher than the figure of 39 for 2016.

“We recognise that it is still too low,” he said.

Oh please. As per this very article, there are more white students at Bristol than at Cambridge. Where is the outrage? 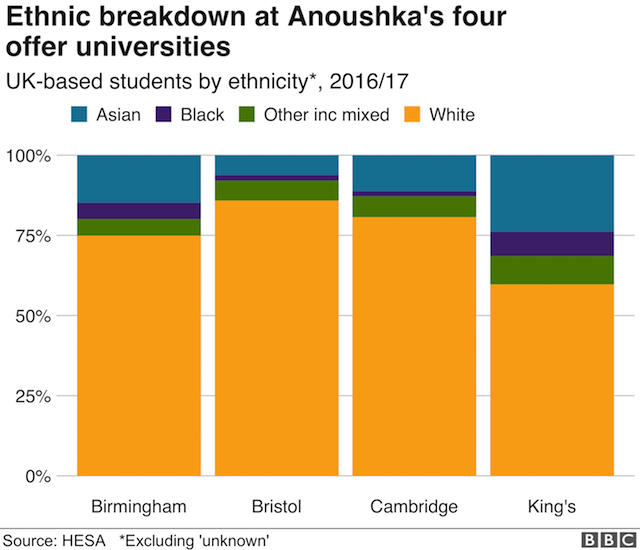 It seems that there is a self-perpetuating cycle. Smart kids from diverse backgrounds won’t apply because they think they won’t fit in, because they don’t see people like them. This in turn means that the demographic of students will never change, so the view that it’s not the right place for people of colour will persist.

Yeah, it’s pretty clear everyone who’s complaining also wants somebody else to be the guinea pig.

I think this girl needs a little reminder of what she could learn from her other ethnic heritage: