…but it’s not a SpongeBob SquarePants soft toy, more’s the pity.

Baby On Board signs cause accidents

Well stop selling the damn things then. I loathe them; they are huge, hideous, smug, useless and create blind spots for drivers.

That woman is talking out of her bottom by the way:

‘Baby On Board’ signs are useful in alerting the emergency services that a child may be involved in the event of a crash,” said Julie Townsend, deputy chief executive of the charity, Brake.

Rubbish. Emergency services regularly deny that they even look at the things as they are trained to search for children regardless. How many parents bother to remove the carbuncle when their kid isn’t in the car anyway? None. The ones who said they did in the article are almost certainly lying. Why would they remove them? They’re still ***A PARENT*** and that’s what needs to be advertised to the world, isn’t it? As for other drivers being extra careful around their oh-so-precious offspring, honestly, who gives a shit? My life is precious too but who’s being extra careful around me? 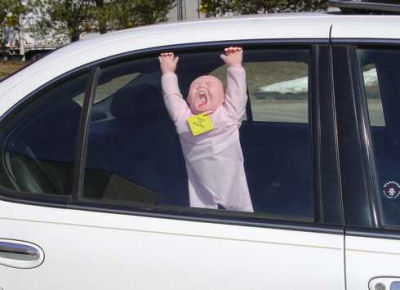 The very fact that Loud Chav (one of our less savoury neighbours) who yells at and insults his wife in front of their little girl on a regular basis has a “Little Princess On Board” sign in his car tells me all I need to know about what kind of parent he is.

The things are novelty items, full stop. It’s rather ridiculous that a charity is peddling an urban myth, although my cynicism towards charities and their self-serving ways increases by the day.