Last night I watched Panorama, which was once again dedicated to the national British pastime – drinking in excess – and the unnecessary pressure it is putting on the NHS. For good measure, they filmed inside an A&E department so we could appreciate the full unpleasantness of what doctors and nurses have to deal with on a daily basis. What did the footage show us? All sorts of drunk idiots with various, mostly self-inflicted, cuts and bruises (not to mention the missing brain cells, although this last condition may be congenital) being looked after by very patient medical staff.

Meanwhile, everyone else is being actively discouraged from using the service (presumably to make room for more drunk idiots). There’s a poster in the waiting room of my local surgery, educating patients on what ailment deserves a trip to A&E. It’s similar to this one: 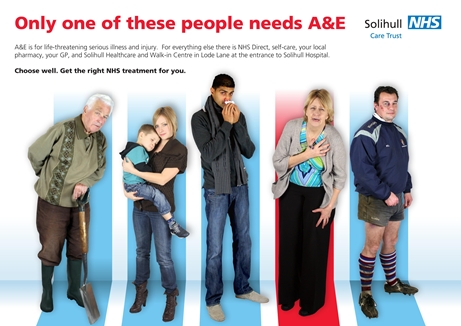 Underneath the picture of five unwell-looking people, you can read this:

Basically the message is “If you’re not dying, don’t waste A&E’s time”. Here’s some more advice for the general public (click pic to read): 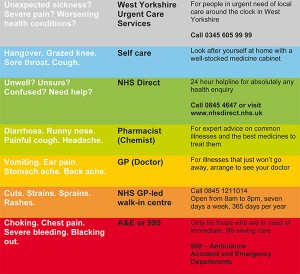 Take a closer look at the red bit:

Needless to say, the drunks featured on Panorama were emphatically not at death’s door (one guy was having a cut to his chin treated after trying to run around a lamp-post as a game). So why the double standard? And why are none of those “don’t waste NHS resources” campaigns aimed at the biggest NHS-resource-wasters in the country? I suppose NHS bosses don’t want to throw good money after bad…

“At peak times, 70% of A&E presentations are alcohol-related in some way, whether it’s indirectly or directly”.

This statistic sounds rather scary at first but is in fact a totally meaningless figure. If people with non alcohol-related problems do as they’re told and refrain from going to A&E for treatment (some people have actually received letters from their GP scolding them for daring to do so!) then it’s perfectly obvious that the majority of users will be a) the dying ones and b) the only non-dying ones who are still welcomed with open arms: 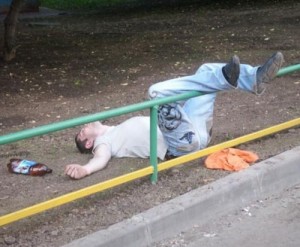 I recently declined the offer of an ambulance during an excruciatingly painful attack of sciatica in the middle of the night because I just didn’t fancy spending a minimum of eight hours in A&E, watching dozens of intoxicated morons with a bleeding face get stitched up whilst I waited in the queue, trying not to scream in agony. Call me fussy.