Two articles have recently appeared in the Guardian, both so loaded with anti-French propaganda my jaw hit the floor. Everyone is always very quick to criticise the Daily Mail every time it publishes a xenophobic story (and to be fair, it usually deserves it) but it amazes me just how much the Guardian gets away with.

First, this: Poor French women have it hard in a macho country

I cannot comment on things like the pay gap as I have almost no experience of the French workplace but this article is stuffed with inaccuracies and wild generalisations.

“The women seem bedevilled by standards that are either unattainable (to be a perfect size eight) or demeaning in themselves (to be restrained, demure, moderate in all things, poised; a host of qualities that all mean “quiet”).”

I think the problem here is that the journalist is making the classic mistake of confusing ‘upper middle class neurotic Parisienne’ with ‘average French woman’. It happens a lot in the English-speaking press so I’ll let it go.

“Female representation in politics is appalling, due to very inflexible rules about the pool from which the political class is drawn. All politicians come from the highly competitive set of graduate schools Les Grandes Ecoles (apart from Nicolas Sarkozy) which, until recently, had only a smattering of women, and none at all in Polytechnique (it is sponsored by the Ministry of Defence: women are now allowed in)”.

Female representation in politics may be appalling but it’s got nothing to do with where they studied. There are lots of female students in Grandes Ecoles (anyone can get in so long as they’re Hermione-style brainy in order to pass the entrance exam, and can afford the fees as all these places are private) and girls have been allowed in the (hugely prestigious and incredibly hard to get into) Ecole Polytechnique since… *googles*… 1972!! This lack of research deserves a spanking.

OK, maybe only 16% of students are women but a) it’s a military academy, which appeals to a certain type of person and b) the uniform doesn’t really help, does it? 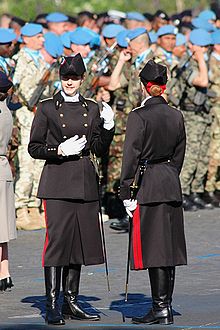 “When there is a high-profile female face in politics, it is indicative of some force other than equality. At the local elections last week the two big winners were the Socialists, whose leader is Martine Aubry (daughter of Jacques Delors), and the National Front, led by Marine Le Pen (daughter of Jean-Marie Le Pen)”.

Now, I’m not going to deny nepotism is big in France (although any journalist from a country where Chloe Madeley is considered a celebrity should perhaps refrain from commenting) but how about mentioning all the French female politicians who came from a perfectly anonymous background? Ségolène Royal, Michèle Alliot-Marie, Dominique Voynet, Christine Lagarde, Rachida Dati… there are many more. Where is that “force other than equality” now?

And now, brace yourselves for an absolute gem. I read it twice, looking for a clue that the interviewee was joking. Nope, she wasn’t.

“Thomasine Jammot, a cross-cultural trainer (who teaches travelling business people how they might overcome cultural misinterpretation, on their own or someone else’s part) [says] “There are many things you can’t do, as a woman, in France. You can’t be coarse or vulgar…”

Er, why would you want to be coarse and vulgar in the first place?

Oh, and by the way: yes you can. Maybe not in upper middle class Paris, but go and live in a working class area of northern France and you’ll find happiness there.

“…or drink too much, or smoke in the street. I would never help myself to wine.” “How would you get more wine?” I ask, baffled. “At the end of an evening, I might shake my glass at my husband. But no, I would never touch the bottle.”

What?! I think she has been touching the wine bottle, and many other bottles too!

I have my doubts on this woman’s Frenchness anyway. NOBODY, but NOBODY is called Thomasine in France. She may very well be a Brit married to a posh Frenchman and unaware that “Paris n’est pas la France”. That or her name was changed by the journalist (but then why pick such a weird name by French standards?).

“Your appearance will change everything, even for an interview for a job. In France you employ anyone you like. If the interviewer thinks that you’re too fat or ugly: dommage for you!”

How can you prove this doesn’t happen in the UK? All they have to say is “We don’t think you’ll fit in with the existing team”, and Bob’s their uncle.

“The pressure comes from society itself, not only from men but women. I am still a bad example to talk about it. I spend my life to look after my garden more than me. As a result, I never found a husband.”

This from Nicole Fiévet, 63. So she started looking for a husband in the Sixties. Very relevant to today’s France, isn’t it?

And now we’re about to find out what this article is really about: how racist France is!

“In 2002 it was made illegal to “passively solicit”. Mainstream feminists – politicians, unionists, various figures who had grouped together in 1996 under the title CNDF – supported the law; as prostitution constituted violence against women it obviously should be outlawed.

Activists countered that this denied prostitutes even the patchy safety of a busy street. They said, furthermore, that this was tacit racism, as these prostitutes tended to be from eastern Europe or Africa, and many were deported following the clampdown (even though there was a caveat offering clemency to any woman who named her trafficker; none ever did).”

There we go, it’s racist to ban street prostitution because the prostitutes aren’t white and French!

“in 2004 the ban on the veil came up, on the same grounds, that it represented a violence against women. Again, establishment feminists put up no opposition as, in the end, it is pretty sexist, to have your dress code determined by the sexual paranoia of your menfolk.

But this, again, had a terrible punitive effect on the women it purported to protect – in this case, girls were denied education if they continued to wear a veil.”

They were not denied education, they were either suspended or expelled from their state schools as they were deliberately flouting the law. Their parents were perfectly free to enrol them in private schools (which are not very expensive in France) just like the parents of kids who got expelled for any other disciplinary reason.

“In April, a new ban on the niqab, passed last September, will come into force. Would this have happened in a country where it was less routine, less state-sponsored, to judge a woman on her appearance? I think not, but it’s hard to prove.”

This is actually quite rude. She makes it sound like France is banning the veil because French men need to see women’s faces so they can judge them on their appearance! Where does that leave those other European countries that have already taken similar measures, not to mention Turkey?

Here we go again with the crazy generalisations. To think my sister in Paris happily breastfed her two children for as long as she wanted, without ever having the slightest clue that she was being a dangerous revolutionary. Thank God for British journalists, eh?

Er, sorry about that. Childish stuff is rather contagious.